Karl-Magnus Möller Curious about the curiosities of curiosity

How do you change a creative industry so steeped in tradition as theatre?

Revolution is how. And John McGrath knows a thing or two about that.

John’s tenure at the National Theatre Wales has helped reinvigorate the Welsh theatre scene, giving playwrights, performers and young theatre companies the confidence to “question what theatre can be” and in doing so has produced some truly innovative work along the way, including the Radicalisation of Bradley Manning and the ground breaking production of The Passion starring Michael Sheen. 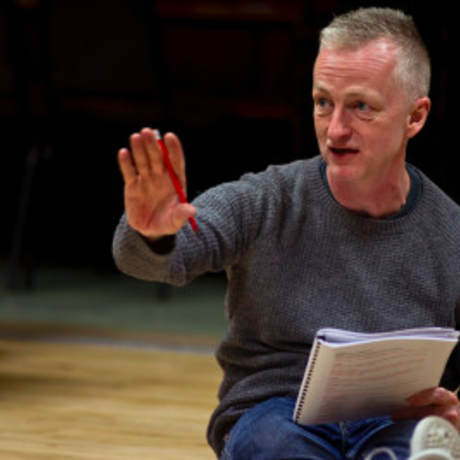 Born in North Wales and raised in Liverpool, John trained as a theatre director in New York, working for a decade with legendary companies such as Mabou Mines and La Mama, where he was deeply influenced by the rich crossovers of artforms and media in the city. Returning to the UK, he opened the newly renovated Contact Manchester in 1999, creating a vibrant and diverse space for up-and-coming artists, and gaining a global reputation for innovation and engagement with young people. Since 2009 he has been founding Artistic Director and CEO of National Theatre Wales.

Winning many awards and establishing the company as a world leader in site-specific and digital work - The Observer newspaper referred to NTW as “One of the best things to happen to the stage in the past five years”. Directing work for the company including the award-winning The Radicalisation of Bradley Manning, and, most recently, a new version of Brecht’s Mother Courage in Merthyr Tydfil Labour Club. NTW is also widely celebrated for its engagement with a wide range of communities throughout Wales, and for its work with emerging artists – nurturing the independent theatre scene in Wales.

John has also published a seminal book on art in the surveillance age (‘Loving Big Brother’ Routledge 2004), and his honours include the NESTA Cultural Leadership Award, a Doctorate in Performance Studies from New York University and an Honorary Doctorate from the Open University. Recent international work includes directing the world premiere of The Opportunity of Efficiency at the New National Theatre in Tokyo, and he is regularly invited to give talks and lead workshops in cities ranging from Melbourne to Shanghai. John will leave NTW at the end of 2015 to take up the role of Artistic Director and CEO at Manchester International Festival.

Come and hear John speak about Revolution and what part it’s played in his life and work this far.

It was about connections between people that didn’t know each other, it was about why things mean something and matter to us and it was about a very simple but still important message that even reading can be resisting. — John McGrath

Revolution I think doesn’t happen through generalised sentiment it usually happens because people are riled up about something very specific that’s happening in their communities. — John McGrath

Absolutely crucial for us as a company and for a national company is a strong sense of the local. — John McGrath