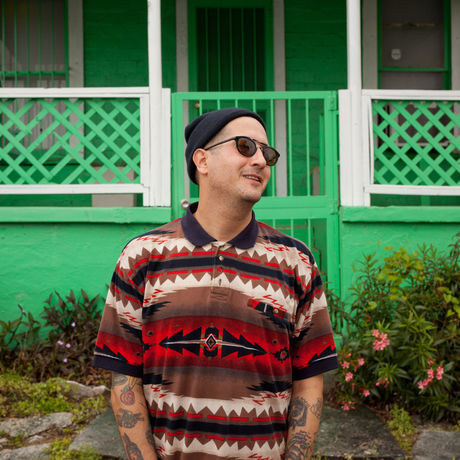 Somewhere between the tropical beaches, pockets of culture-starved boredom and retirement communities lies a small community of DIY artists playing the hands they were dealt and trying to build something in the void. Bleubird is one of these people.

Born to an immigrant father and hippie mother in South Florida in 1977, Bleubird (Jacques Bruna) developed an early affinity for 2 Live Crew and Public Enemy and eventually gravitated towards skating and punk rock. Bleubird has released several full-lengths and EPs both as a solo artist and with groups such as Triune Gods and Les Swashbuckling Napoleons, hosted open mics and warehouse parties in Florida bringing together creative folks from multiple disciplines, and traveled the country in a decked-out van for two years turning every day into an impromptu concert-cypher-party with his FREEEBIRD project. After stints living in Canada and Europe, Bleubird returned to the states to release his Fake Four debut Cannonball!!! and shortly thereafter began channeling his Floridian roots into a bass-heavy crew known as Death Jam Posse, writing his verses under the alias of Young Lauderdale and rapping hard as hell over beats from a local producer by the name of Mister Belvedere. 2015 saw the release of his stoned side project FTLiENS alongside producer Numonics, properly paving the way for the ever-evolving Bleubird’s new full-length Lauderdale.

Bleubird has traveled the globe many times over, rocked shows and collaborated with indie rap’s finest, washed dishes and worked odd jobs to live illegally in places like Montreal and Berlin, but was always bound for Fort Lauderdale to build new dreams in the place of any that may have died along the way.

A lot of people grow up here and get tired of the lack of culture because of the city we're situated in & we're constantly overshadowed by Miami. So it's wonderful to see The Art & Creative Community growing here in my city. — Jacques' Bruna