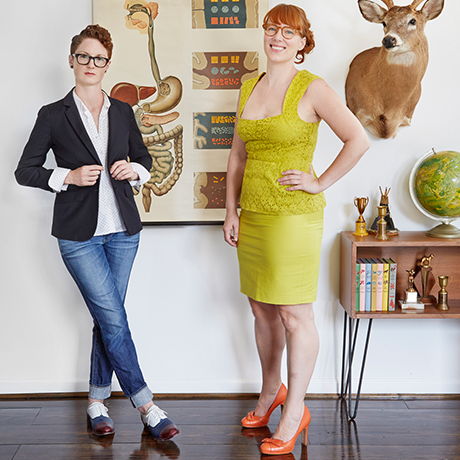 Faun holds a Masters in Design from Yale. Her work has been shown in New York, Berlin, Los Angeles and San Francisco. Faun has experience building and leading creative teams at advertising and branding firms with a client roster that includes Nestle, Unilever, P&G and Coca-Cola. She has been awarded for this work with both a Cannes Lion and an Obie award.

Meg is a nimble maker, combining big-picture thinking with an obsessive eye for the craft of design. She studied advertising and photography at Syracuse University and has worked for a variety of well known design studios before co-founding Guts & Glory. Her work has been recognized by Communication Arts, Print magazine, HOW magazine, and The Type Directors Club of America.

Since founding Guts & Glory, their work has been featured by numerous news outlets such as the Melissa Harris-Perry Show, New York Magazine, and Time Magazine. In 2013 they appeared on The War Room to discuss their controversial gun control advocacy project, They Don’t Work For You, which received a Justified award in 2014 by the AIGA.