How to Do What Moves You

Turning a hobby into a career isn’t something that everyone is lucky or talented enough to do. Ginger grew up in Southern California (with roots in Hong Kong, where almost everyone gets around by using mass transit) and now heads up Bike East Bay in the San Francisco Bay Area. One of their most formative early jobs was working at an adaptive cycling center that specialized in providing bikes that accommodate however someone’s body may (or may not) move and offering tandem bicycling opportunities with people with blindness. They published FlamingBike.com which lists bike trails around the country. At Bike East Bay they’ve worked to articulate the organization’s stance on social justice, racial justice, and transportation justice — eventually moving into a leadership position as the Executive Director — and are one of the few people of color in leadership within the bike movement. Today they are working to shed light on the racist policies of the past that divided and demolished thriving Black and brown communities to make way for freeways and car-centric streets; and revising state laws to prioritize moving people over cars. Learn more about their organization’s work at BikeEastBay.org 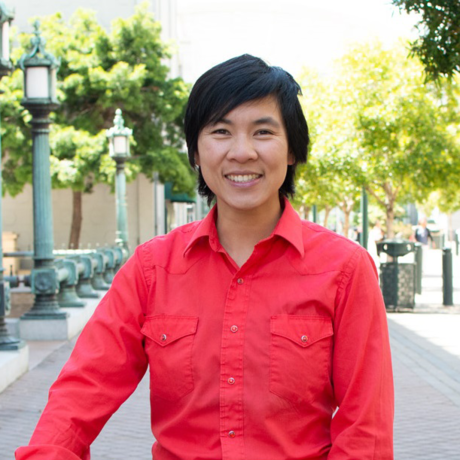 Ginger Jui stepped up as the Executive Director of Bike East Bay in 2018, after previously serving as Membership Manager and Communications Director. A child of immigrants, Ginger grew up in both the transit-rich metropolis of Hong Kong and the car-centric sprawl of southern California. Nowadays, Ginger is a full-throated advocate for biking, walking and public transit. Ginger also sits on the board of directors at Cycles of Change, a POC-led bicycle collective based in Oakland’s Fruitvale neighborhood.