Going Beyond at CURRENTS 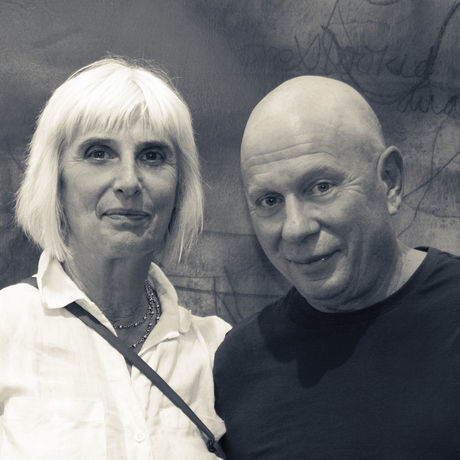 FRANK RAGANO – Co-Executive/Artistic Director of Currents New Media Frank was born and raised in Tampa, Florida. He studied dance - ballet and modern, in Gainesville Fl, before a move to New York City, in 1980, shifted his focus to theater. He was performing with the Lee Nagrin Dance Theater Company, when his interest in set design, inspired work on sculptural installations. He moved to Santa Fe, in 1996, to continue his sculptural installation work which began to include video as an artistic element.

Frank has also developed a career as a designer and builder of contemporary homes. His expertise has become an important factor in Parallel Studios ability to deliver an excellent, large scale exhibition on a very small budget.

Frank will be joined by his partner Mariannah Amster – Co-Executive/Artistic Director of Currents New Media.

Born in 1948, Mariannah attended the High School of Music and Art in New York City, and graduated, in 1983, with honors from Smith College (Northampton, Massachusetts), with a triple major in Art, Writing and Biology.

Her background as a painter, printmaker and book artist evolved into a focus on digital media - video, video installation and digital printing in 1996. Since 1999, Mariannah has been the buyer and manager of Maya, in downtown Santa Fe. She has owned her own small clothing design and fabrication company.

Her commitment to Parallel Studios brings her business and artistic skills together in service to a medium that she loves, allowing her to participate in cultivating and supporting the next generation of New Media artists.