Dancer and choreographer Crystal Pite speaks on Conflict as a Necessary Part of Practice.

For the September, 2012 1st birthday edition of CreativeMornings/Vancouver, we were honoured to have world famous dancer and choreographer Crystal Pite from Kidd Pivot as our speaker.

In 2002, she formed Kidd Pivot and continues to create and perform in her own work. The company tours nationally and internationally, performing such highly demanded and critically acclaimed works as Dark Matters and Lost Action. Kidd Pivot’s residency at the Künstlerhaus Mousonturm (2010-2012) in Frankfurt provided her the opportunity to create and tour her most recent works, The You Show and The Tempest Replica, with her dancers and collaborators.

Crystal is the recipient of the Banff Centreʼs Clifford E. Lee Award (1995), the Bonnie Bird North American Choreography Award (2004), and the Isadora Award (2005). Her work has received several Dora Mavor Moore Awards (2009, 2012), and a Jessie Richardson Theatre Award (2006). She is the recipient of the 2008 Governor General of Canadaʼs Performing Arts Award, Mentorship Program. Most recently, she was awarded the 2011 Jacobʼs Pillow Dance Award.

Notable quotes from Pite’s talk: “Balance feels still and peaceful.” “Conflict is part of breakthrough creativity.” “Your body is your location. When you dance you are profoundly engaged in being there.” “Do I want the audience to like my work? Yes, but it’s about reaching them. I try to build many pathways to connect.” “I’m not an artist, I’m a craftsperson. I don’t rely on inspiration. I just work and create.” 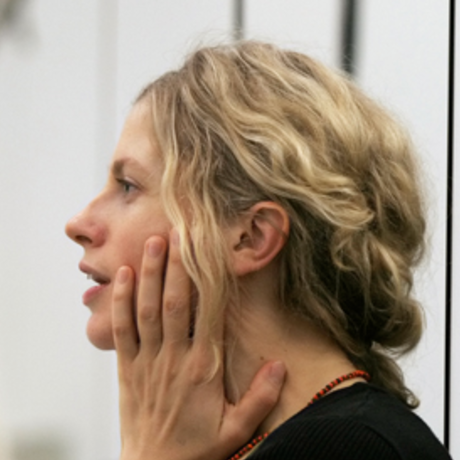 Crystal Pite has collaborated with celebrated dance artists, theatre companies and filmmakers in Canada, Europe, and the United States. Since 2002, she has created and performed under the banner of her own company. Her work and her company have been recognized with numerous awards and commissions. Kidd Pivot tours extensively around the world with productions that include The Tempest Replica (2011), The You Show (2010), Dark Matters (2009), Lost Action (2006), and Double Story (2004), created with Richard Siegal. Kidd Pivot is the recipient of the 2006 Rio Tinto Alcan Performing Arts Award, and was resident company at Künstlerhaus Mousonturm, with the support of Kulturfonds Frankfurt Rhein Main, in Frankfurt, Germany from 2010 to 2012.

Like life, a dance creates and destroys itself in every moment. Like love, it is beyond reason. — Crystal Pite

To dance is to investigate and celebrate the experience of being alive. — Crystal Pite

If I think of myself as a craftsperson rather than an artist then I can busy myself with the task and if inspiration comes along, great. — Crystal Pite