Вадим Ильин Why less is more?

Crispin talks about the journey and challenges of machine pressed Books.

Crispin has worked with publishing books by hand for nearly 40 years. His stories and tales he tells in this months talk about the details and how this art forms is going through challengeing times for publishers. 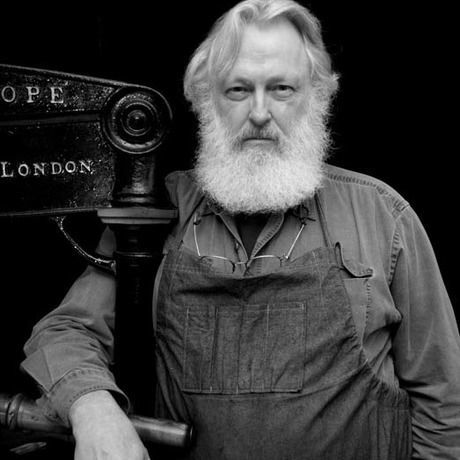 Crispin Elsted is a Canadian poet and publisher of handcrafted and printed books. He is the cofounder, with his wife Jan, of the book-publishing company Barbarian Press located on a remote farm in Mission BC. They hand set type and print woodblocks on presses that date back as far as 1850.

Elsted has also performed as a Shakespearean actor in repertory theatres and has composed, arranged and performed jazz and classical music. In his Vancouver upbringing he was a bear minder at the Stanley Park Zoo as well as a writer at CBC!

How do you define creativity and apply it in your life and career? Creativity is simply the current cant word for imagination. Like everyone else, I use imagination whenever I consider or speculate about a subject, try to conceive an approach to a new or unusual problem, or attempt to develop a new way to articulate thought. Occasionally I succeed.

Where do you find your best creative inspiration or energy? That’s quite impossible to say: it can be anything, at the right moment. Sometimes it may be ‘a certain slant of light’ (in Emily Dickinson’s phrase); at others, my wife’s voice, or a turn of phrase overheard in a street – a chord of music, sudden pain or pleasure, the feel of a cat’s back under my hand, or a stone. The source of the energy which derives from it is implicit in what Chesterton said: ‘Art is one per cent inspiration and ninety-nine per cent perspiration.’

What’s one piece of creative advice or a tip you wish you’d known as a young person? You’ll never make anything worthwhile if you don’t love the labour involved, the process of making, more than the finished work.

Who (living or dead) would you most enjoy hearing speak at Creative Mornings? William Shakespeare – although I expect he’d decline because of the pressure of work.

What did you learn from your most memorable creative failure? There have been too many to remember, but essentially every one of them taught me the same thing: try again. But of course, since they pushed me forward, they weren’t failures, but parts of the process. Nothing from which you learn can be a failure.

What fact about you would surprise people? I was once a bearward – which in some ways was my favourite job.

What are you proudest of in your life? My wife’s love.

If you could interview anyone living or dead, but not a celebrity, who would it be and why? Mr Bert E. Smith, a compositor at the Curwen Press, Plaistow, London, from 1924 to 1964. I don’t when he was born, or when he died, or whether he left any descendants. During his time at Curwen he designed and composed in type hundreds of ornamental borders, most set in pairs of formes to be printed in two colours. (Curwen Press was at this time entirely a letterpress operation.) Many of these borders were wrapped and stored at the press for future use in reprinting jobs, and at Barbarian Press we now own all that remained of them when the press closed in 1984 – over a hundred.

We are presently preparing a book to be called Bordering on the Sublime: Ornamental Typography at the Curwen Press which will set out the history of the press, discuss their particular style of design, and Bert Smith’s approach to the use of ornaments. We will also reprint all of these borders from the original type.

We can find out nothing about Bert Smith beyond his name and the fact that he spent forty years at Curwen, most of them working exclusively with ornaments. We have a few photographs. I would be honoured and delighted to be able to speak to him – although I am quite sure he would be bewildered at all the fuss. That, in fact, would be part of the fascination.

If you could do anything now, what would you do? Exactly what I am doing.

What books made a difference in your life and why? The Plays of William Shakespeare. My father began to read Shakespeare to me the day I came home from the hospital as a newborn, and continued to do so every day until I learned to read for myself at 3, and very often after that as well. From Shakespeare I came to recognize the beauty of the English language (helped by the fact that my father read beautifully), and the natural attraction of narrative, which I came to learn at almost the same time held the same attraction as melody: compelling sequence and intrinsic logic. Narrative is metaphorically bonded with melody in structure and effect, as are diction and tone in language with harmony in music.

A Note by William Morris on His Aims in Founding the Kelmscott Press … I saw a facsimile of this, the last book issued by Morris’s Kelmscott Press, in a bookstore when I was an undergraduate, and I was struck for the first time by the splendour of type and its placement on the page. I had always been a reader, but this was the first time that I had really been transfixed by the appearance of a book. It was this, after many windings and adventures, which eventually drew me toward book design and publishing, and led to Jan and I founding Barbarian Press in 1977.

What practices, rituals, or habits contribute to your creative work? The practising of techniques which allow me to use the tools of my craft properly, and the habits of familiarity implicit in the arrangement of materials and the knowledge of process, both contribute equally. I know of no rituals, beyond the civilities of a loving relationship. Pushkin, in Eugene Onegin, says (in a loose translation) that ‘Habit is sent from heaven to those who lack happiness’. I think that, in some sense, is true; but then if one is already happy in one’s work, there is no need of redress: habit becomes a pleasure in itself.