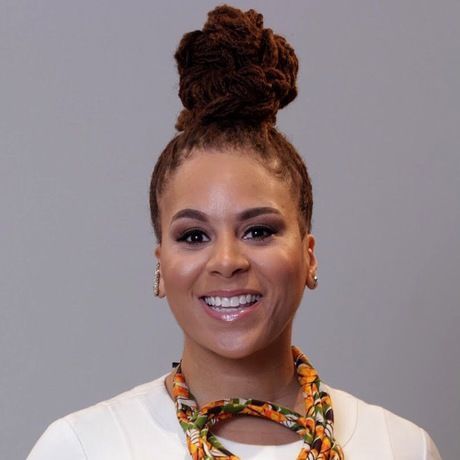 From MTV to the historic Rock and Roll Hall of Fame, Yewande’s socially charged music has taken center stage with the likes of the Black Eyed Peas, Maroon 5 and India Arie, but it is her work as an award-winning lecturer, social activist and honorary U. S. Cultural Ambassador that has become her greatest achievement.

In 2014, she became Virginia Commonwealth University’s first Diversity Lecturer-in- Residence in the school’s 177-year history for the Office of the Vice-President for Health Sciences. During this 2-year residency, Yewande developed the nation’s first diversity healthcare curriculum for pre-health and professional health science students.

In 2016, VCU’s Office of Global Education awarded Ms. Austin with a Globe Faculty Fellowship under which she created “The Art of Change” – the department’s first social entrepreneurship class, which she conducted concurrently online with the University of Botswana. With the success of this 3-credit course, Ms. Austin was asked to direct a study abroad program in The Republic of Botswana – only the second trip to Africa in the department’s existence.

Through a combination of education, sustainable skill development and the arts, her humanitarian organization, the Change Rocks Foundation (founded in 2006), has taught over 250,000 vulnerable youth, advocates and educators in 16 countries how to create sustainable solutions that reduce poverty and injustice. In 2015, Ms. Austin’s TED talk, “Running into the Dark”, introduced audiences to global human trafficking. In 2017, the U. S. State Department awarded Ms. Austin her 4th grant to produce youth empowerment programs for former child soldiers in the Democratic Republic of the Congo and genocide orphans in Rwanda.

In 2018, Yewande will release a documentary, “Amazing Grace: Freedom’s Song”, which captures her 3-year long journey uncovering human trafficking across America and Nigeria – 2 countries bound by a 400-year long history of slavery. A 2017, 2014 and 2013 CNN Hero Award nominee, Yewande is currently building Alheri Village - a sustainable resettlement community for Boko Haram conflict refugees in Abuja, Nigeria. It is this inspiring dedication to humanity that has generated demand for her work around the globe.

The greatest act of courage you can perform is to do what makes you happy; to do the right thing, even when its scary." — Yewande Austin

There’s a distinct ripple effect that occurs when we witness or perform acts of courage. — Yewande Austin