Breaking Taboos: Challenging the untrue stories we tell ourselves

Our lives are shaped by taboos that come from society, family or ourselves. By questioning these untrue stories, we shine a light, liberating ourselves from false beliefs.

Our lives are shaped by taboos that come from society, family or ourselves. Whether they are true or not, we often internalize them and accept them as fact. Taboos can manifest as untrue stories we tell ourselves, limiting our understanding of who we are and who we can and cannot be. By questioning these untrue stories, we shine a light, liberating ourselves from false beliefs.

Join Connie as she shares her journey uncovering and dismantling one of these stubborn myths that impacted her life for over 6 decades and how re-inventing this old narrative helps her live a richer and more powerful life. 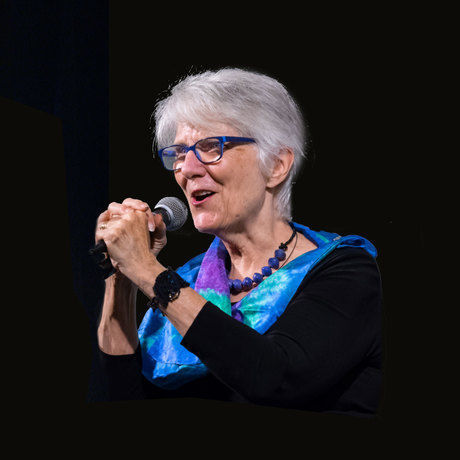 Connie Regan-Blake is one of America’s most celebrated storytellers. She has captivated the hearts and imaginations of people around the globe with her powerful performances and workshops. Entertaining audiences in 47 states and 17 countries so far, she brings the wisdom, humor and drama of stories to main stage concert halls, libraries and into the corporate world.

After graduating from Loyola University in New Orleans with a degree in Political Science ( … which some say is a good background for storytelling!), Connie took her hard earned wages from summer waitressing and bought a one-way ticket to Belgium. With only a backpack and her sense of adventure, she traveled throughout Europe for over a year.

Upon her return to America, Connie landed in Chattanooga, TN and was hired as a storyteller by the Chattanooga Public Library thanks to her first-cousin, Barbara Freeman. Then in 1975, Connie and Barbara quit their beloved library jobs and hit the road in their yellow pickup truck. As “The Folktellers,” the duo toured the country thrilling audiences with this emerging art form of performance storytelling. Their original two-woman play, Mountain Sweet Talk, holds the record as Asheville, NC’s longest running theatrical production.

Throughout her career, Connie’s rare talent transforms convention halls into a wondrous landscape and can turn a packed theater into an intimate circle of friends. She has performed at the nation’s top folk music and storytelling festivals, including the Smithsonian Folklife Festival in Washington D.C., the Timpanogos Storytelling Festival in Orem, Utah, and the National Storytelling Festival in Jonesborough, Tennessee. (It is Connie’s unique honor to be the only performer invited onstage for every NSF since its conception in 1973!)

Since 2005, Connie has been an active community partner with Bead for Life, a nonprofit that empowers Ugandan woman by giving them a helping hand so that they can pull themselves out of poverty. She is passionate about bringing these women’s stories to life.

Today, Connie continues to tour as a performer, coach and workshop leader of her series of original workshops. These workshops invite, challenge and support participants to tell their stories, whether at a family reunion or a festival stage

Connie resides with her husband, Phil, and her frisky cat, Alaska, in the Blue Ridge Mountains of Asheville, NC. In her free time, she loves to enjoy the beauty of her flower garden, do a modified Crossfit, and create collages. She is a nature-watcher and frequently sights uninvited bears and bobcats around her mountain home.

There is this enormous potential and creativity as we age. As long as we're willing to question taboos. — Connie Regan-Blake

There are a lot of taboos that limit us. They tell us who we can be and who we can't be, they limit our choices. — Connie Regan-Blake