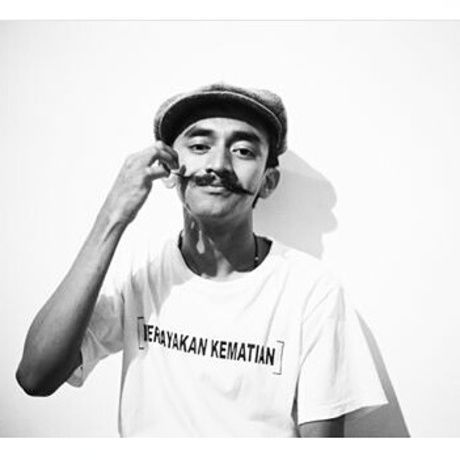 Wanggi Hoed is an Indonesian mime artist and the founder of Mixi Imajimimetheatre Indonesia. He has been engaged in performing art scene since 2004, on which his works mostly revolved around social justice, humanity, history, and cultural mission. He’s actively participating, collaborating, and creating cultural art workshop with diverse artists, musician, and community, locally and internationally. Some of them are Aksi Kamisan Bandung, Indonesian Mime Artists Society, ASEAN Mime Society, Teater Cassanova Indonesia, Awak Inisiatif Arts Movement, and Nyusur History Indonesia.

Wanggi is widely known as the social activist who utilizes mime to raise awareness of issues like anti-corruption, the murder of Munir, and violence against women. Mime, for Wanggi, is a medium to express silence: the universal language hidden in our noisy world. Using the movement and body language, he is trying to reveal the meaning behind the articulate, extroverted world upon us.

Transparency, for him, is the soul of his art.

To show and spread love through flowers that will never die and always bloom is the dream behind the creation of Hema Fiore. Share your love with us and we’ll be happy to help it bloom ❤️

Established in March 2016, the word Namelaka itself is derived from Japanese term which means smooth and creamy. We adopt this as our philosophy in creating desserts. As such, we always strive to produce cakes with smooth mouth-feel and be pleasingly creamy. Our craft is also supported with the help of premium ingredients in even the tiniest of our creation.

Shinmie derived from the acronym of the owner’s name “Shinta” but on the other hand has japanese meaning “Shin (しん)” which means honesty and truth. It is in line with Shinmie’s core value that their noodle is made from 100% organic ingredients without MSG and artificial preservative.

A special day must be celebrated with special food. Eyehungry Eatery presents to you a freshly baked cinnamon roll with creamy and sweet toppings to brighten up the mood.

KOPI TALA saw passion in young adults towards entrepreneurship and introduction of Indonesia’s top commodity, coffee. Manual brew coffee shops are sprouting here and there, and often are underestimated. Therefore, KOPI TALA enacts as a space for reviews of manual brew coffee shops and other related stories of Indonesian coffee, from the upstream phases to the downstream phases.

Started from the concept of “coffee shouldn’t be so serious”, Kedai Kopi Guyon was born. This idea was then translated into a manual brew coffee shop, selling single origin coffee in a multifunctional cart made from a modified vespa. Only open from 22.00-04.00 at Jalan RS Fatmawati no. 22, this coffee shop befriends the cold city night and flying dust from road constructions.

October is an important month for us. It’s the month when our community was born, that time when our curiousity was nurtured from a single question: Is it true that a city is the place where anyone can do anything? Is creativity really everyone’s cup of tea? Hence, the narrative of every breakfast lecture we’ve thrown is to capture the good energy from the people who are passionate to make things work.

Two years from that moment, here we are preparing our journey to CreativeMornings Summit in Austin. It is our ultimate opportunity to develop ourselves as creative organizers, to expand our creative community in Jakarta to be bigger and better. Before that happen, we would like to express our gratitude for everyone who’ve managed to get up earlier than usual, beat the traffic and spent few hours with us. Come celebrate with us!

The celebration will be held on Saturday, October 22, 2016. Starting 9 am until lunchtime. Not only that we’ll be having Wanggi Hoed, the session will be continued with a simple birthday event and some humble surprises!