Toby Morris Am I Being a Dick?

For Clara Bensen, the cure for clinical anxiety was first, to let go. And then, to take the risk of a lifetime.

Post college anxiety? Who doesn’t know that feeling. But Clara Bensen felt it in an extreme way, to the point that she believed her life was over. That was until she decided to accept her current conditions, let go of all of her life’s dreams and ambitions, and couch surf across Istanbul with nothing but the clothes on her back and a travel companion she’d just met on OkCupid (who you might recognize as another former CMATX speaker). In this talk, Clara lays out her journey from confused recent graduate to successful author and public speaker, all because she discovered that the biggest risks in life are the ones you don’t take.

For the theme of “Risk” at our April 2016 event, CreativeMornings/Austin actually had two separate speakers—and their identities were not announced in advance. Attendees had to take a risk and pick a talk without knowing who was speaking until they arrived in one of two rooms. Click here to watch the other “Risk” talk by Amelia Torres.

The entire event was summarized in the video below. It was produced by Spredfast‘s Annielyn Felux with music by Uncle Lucius. 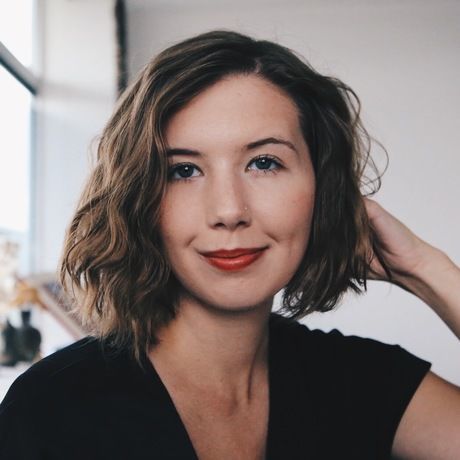 Clara Bensen is a local Austin writer and author of the travel memoir No Baggage, based on a viral Salon article she wrote in 2013. She is an avid traveler and she and her partner Jeff have traveled to over 16 countries in a very unusual style. She’s currently at work on a new project exploring things society considers “crazy” (including women, conspiracy theorists and people on the other side of the political aisle) through a collection of essays and experiments.

I have found the importance in carving out space for things that don’t necessarily have a clear purpose or an obvious logic. — Clara Bensen

I think of taking a risk as an experiment, and there’s lots of different outcomes that you can get from that experiment. Whatever outcome you get, you learn something. There’s wisdom, there’s knowledge, there’s life experience. — Clara Bensen

If you’re trying to create something powerful with a lot of impact, you have to be willing to lean into that discomfort. — Clara Bensen