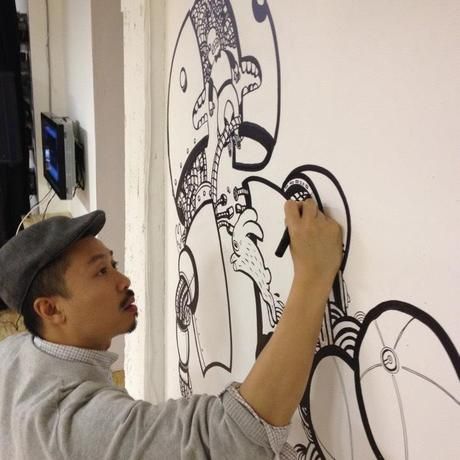 Carson Ting was originally born and raised in Toronto, but has called Vancouver home for the last 6 years. He loves it here more than any other person from Toronto ever has. After graduating with a Bachelors in Design from OCAD, Carson entered the world of advertising as an art director and has since developed award-winning campaigns for everything from cars, to TV’s, to basketball shoes, to burgers (even though he doesn’t eat meat). He currently holds the title of Creative Director and illustrator at Chairman Ting Industries, an experimental creative studio he co-founded with his super fun wife, Denise. Since opening their studio, they have worked for the likes of adidas originals, The Cartoon Network, Microsoft, Kidrobot, IdN magazine, The Canadian Tourism Commission and more. Carson has been named as one of the top 200 illustrators in the world by Luerzer’s Archive magazine, and voted as one of the top five most creative people in Canada by Marketing Magazine. He is also really, really nice. In his off time (which he rarely has), he enjoys running, biking, playing with his pet bunny, and laughing loudly at things only he finds funny.

He is currently working in a tech startup based in both Vancouver and Hong Kong, running his creative studio and freelance art direction.