“Where are you going and who are you bringing with you?”

A remarkable commentary on death that defies any preconceptions. Amparo Garcia-Crow shares her insights from her own life experiences tying them to the French saying, “La petit mort.” 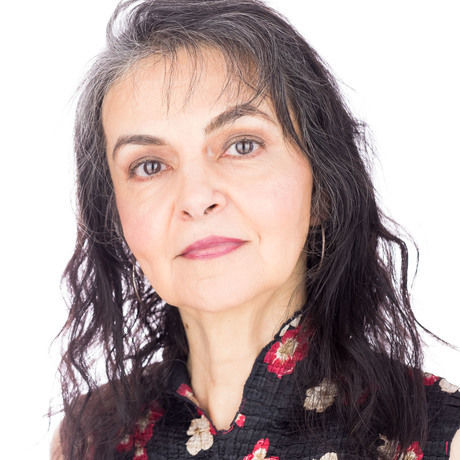 Amparo Garcia-Crow is an inter-disciplinary artist who acts, sings, directs, and writes plays, screenplays, and songs.

As a playwright, Garcia-Crow has been developed at South Coast Repertory Theatre and has had world premieres Off-Broadway, Actor’s Theatre of Louisville, Latino Chicago and various theaters and universities in the Southwest and beyond.

Recently, as an artist in residence with NYC’s Mabou Mines, she began developing “Strip” a new musical which will receive its world premiere in Austin in January 2018. Her other musical “Appeal: The New American Musical of Mexican Descent” has been featured in Hector Galen’s PBS documentary: “Visiones: Latino Art and Culture” on PBS.

As an actress, Amparo has performed at the Kennedy Center and other regional theaters in the Southwest and can be seen on NBC’s "Friday Night Lights” and ABC’s “The Lying Game.”

As a director, Amparo has received the prestigious NEA/TCG Director’s Fellowship and worked on new play development at various theaters including the Mark Taper Forum in Los Angeles. Her most recent film, Love in the Sixties is currently in film festivals; “Death Rattle” which she wrote and produced premiered at the Los Angeles Latino International and Cine las Americas; “Loaves and Fishes” (which she also stars in) aired on the PBS series “Territories”, after premiering at SXSW Film Festival and the Los Angeles Latino International Film Festival. She has also been a Master Acting teacher for the MFA Acting program at the University of Texas where she also taught directing and playwriting.

Locally, she is the founder and host of The Living Room: Storytime for Grownups, teaches in Austin Community College’s Creative Writing and Drama Departments, and is an Ecstatic Dance facilitator at Yoga Yoga.

And most importantly, she is the proud mother of two very creative beings, Alejandro Rose-Garcia (aka Shakey Graves) and the lovely Surya Garcia-Crow who you can regularly enjoy in various commercials, films, tv projects and plays.