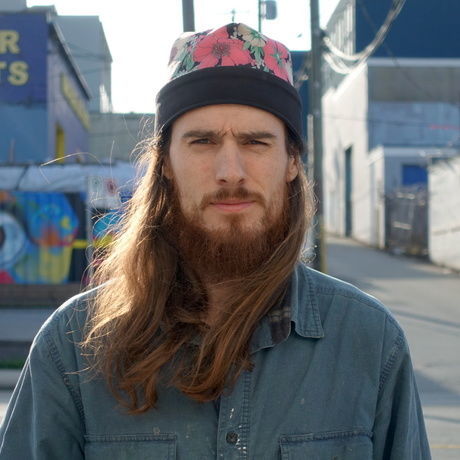 Pat Christie is an industrial designer, entrepreneur, social innovator, and occasional cookie baker who believes that imagination and play are fundamental to a healthy process of creation and problem solving. His education and personal philosophies have expanded beyond the core principles of Industrial Design to include practices of connection, exploration, and support. Simply put, he seeks to work alongside people who believe in the difference that considered results can have in creating sustained cultural value.

How do you define creativity and apply it in your life and career? Creativity for me is about how you go about doing something, though making choices and connections in the context of the people, places and the things around you. It's about navigation and exploration where you are the guide and there is no map, planned route or clear way forward. Creativity is not something that I choose to apply, but is always on. it's embedded in the way I see and the actions I take as I engage with the challenges and opportunities I'm met with in life.

Where do you find your best creative inspiration or energy? Creative inspiration or energy comes for me primarily in two circumstances. One is when I am ENGADGED in producing and practice such as being on the tools and working with materials. The other when I am DISENGAGED with producing and practice such as walking through an alleyway on my way to the store and observing the way moss is growing up the side of a concrete wall. Both of these are examples of being informed about things through noticing and each gives you insight on the way something "could be". It's not "what is" at that current moment, but what is observed becomes a building block in the eventual creation of a future idea.

What's one piece of creative advice or a tip you wish you'd known as a young person? The way you're doing it is the right way to do it, regardless of what anyone says or what you see others doing. Keep doing it your way fearlessly and it will turn into something great and people will notice it. Be open, seek advice and listen to others, but don't let what they say change how you do things, or how you associate yourself with the world around you.

How would you describe what you do in a single sentence to a stranger? I build cool things from wood apparently and sometimes from other materials too.

What myths about creativity would you like to set straight? It's not like the force where you have it or you don't have it. Its fundamental to who we are as humans, but other mechanisms in our world have shaped the word "creativity" into something that it's not and in turn divides people.

Who has been the biggest influence on your life? What lessons did that person teach you? My Grandfather Bob Daly. The lessons I learned from him are the intangible ones in which I find difficult to desired in words, and what I only can describe as "being" in the world. Grandbob as we called him along with Sheila Daly and my Mom and Dad provided me time, space and materials to explore the ideas that I had in my own mind, but did not push me towards outcomes. We celebrated the incremental results and discoveries that were achieved throughout the process of doing and I was acknowledged for the hard work that I put into the things that I loved.

If you could do anything now, what would you do? Go to Japan and work with masters of their craft.

What was the best advice you were ever given? When designing, design something that is part of a system or a system of parts. It has longevity on both a consumer end and the production end. This is what makes a successful design. - Peter and Charlotte Fiell.

Pat hasn't saved anything yet.