See for yourself
All Talks Individuals Chapters
pdx

For December 2013, Creative Morning’s global theme is “Make”. The theme was selected by the Boston chapter and the visual for the month is by Bas Berkhout of "Like Knows Like" and Mac Premo.The speaker for Portland Creative Mornings will be Liz Forkin Bohannon, the founder of Sseko Designs, an ethical fashion brand based in Uganda. For more information, see our event page.

Part of an ongoing series highlighting the amazing people in the Portland creative community. View photos in all their glory on Flickr.

Since graduating from college in 2008, Cheryl Fuller has danced around the job market. Fulfilling her interest in kids, she has coached youth competitive cheerleading and worked as a full-time nanny. But with her love of communications and knack for thinking outside-the-box, Cheryl has found her niche in Portland’s creative industry — helped by a personal connection and some late-night emails. Having worked as a Producer at Opus Creative, for the past six months Cheryl has been the Public Relations Coordinator at Instrument.

We picked Cheryl for her tweet from the Drew Endy talk. Where did you get your start?

I went to school at Oregon State University and was a Speech Communications major. When I graduated in 2008, there were no jobs available so I became a full-time nanny. As it turns out, I was a nanny for one of the Creative Directors at Ziba, while her husband was also at Ziba as a Director of Management. It was a strange world of creativity and structure in one household. I loved the kids, the family and I enjoyed a backseat, behind-the-scenes look into how Ziba ran things.

The wife, though, used tell me that I would do well in a creative environment, seeing as I was organized in their household and tended to think outside the box. And so, two years later when a position opened up at Opus Creative, I applied for the job and earned a position as an Account Coordinator. I helped lead their social media team right away, working on in-house production of their creative assets, editorial calendar and events. Later on, I was promoted as a Producer and worked with the Intel and Nike accounts for about a year.

How did you end up at Instrument?

I had been at Opus for two years and started to realize the direction I wanted to move in was more related to Public Relations. I looked at other local agencies whose work and values I admired, and Instrument was at the top of my list. One night, even though no listings were posted, I sent Instrument an email. Soon enough, they asked me to come in for an interview. I immediately fell in love with their culture and was lucky they felt the same way about me. They offered me a job in July and I accepted.

How has it been so far?

It’s been awesome! I work on a team by myself and feel things out on-the-fly as I develop the role. Among other things, I’m responsible for sending Instrument’s work out for awards and finding speaking engagements for fellow employees. I also help determine how we talk about a project upon its release. It’s done in a mindful way, making sure people don’t think we’re bragging or that we’re somehow better than anyone else’s work. At Instrument, we have an open-door, open-book policy. We suggest how projects worked for us, admit to our mistakes and highlight what we feel we did well.

Returning to your time at O.S.U., when you graduated did you have a sense that you wanted be involved in the creative industry?

At that point in my life, I didn’t really know what I wanted to do. While on campus, I was a part of many student groups and acted as an events coordinator.

Since you’ve started working at Instrument, is there a project that you’ve worked on that you’re most proud of?

We worked with Levi’s on their Commuter brand. I’m proud of our team in how they challenged the popular misconception of social media and how content published on one platform should be duplicated on all platforms. Instead, through a strategy we call “selective social,” the strategists pinpointed the strengths of each information channel through analytics research and divided our content for the campaign accordingly. There were decks upon decks of research. It was amazing.

While Levi’s had their Public Relations team, I was responsible for Instrument’s communications both in the community and in-house. When Levi’s brought bike shop tours to Portland, I was tasked with bringing attention to [the bike shop tours] and scripting press releases for local media. But also, I was responsible for educating the agency and turning all 80 Instrument employees into project ambassadors. When the project wrapped, a big email was sent to everybody to ensure all were on-board, knew what to retweet and repost and why, what they could say about the project, et cetera.

In light of Creative Mornings Portland, how does your morning routine prepare you for your day’s work at Instrument?

The mornings are kind of special at Instrument. There’s a big kitchen area with picnic tables where we all get to hang out for the first thirty minutes over coffee and breakfast. It’s a time to ask what we’ve been up to over the weekend and catch up, until everyone moseys to their work spaces.

My biggest thing is keeping all my ducks in a row and making sure I know exactly what’s going on at all times, where everything is, where I’m supposed to be and managing my own time. I’m a huge list person and I make mine every morning. And then, I get busy.

How long have you been attending Creative Mornings Portland? Any that stick out?

I’ve been going for about two years. I’ve watched Aaron Draplin’s talk a million times. It’s so good, even though I didn’t actually see it in-person.

I would say Drew Endy’s talk was my favorite talk I attended because it was off-the-wall. That’s what compelled me to tweet about it because it’s so Portland. For those who aren’t from the city, I describe it as a place where all these “weird” people in different communities co-mingle together. But, they also leave one another alone because each appreciate one another’s “weirdness.” At his talk, Drew is showing pictures of cheese made from human body parts and I’m thinking, “Sure, why not!” I love that Portland fosters this creative environment where people aren’t scared to say, “What if?” And [at Creative Mornings], all these people from different agencies and contractors can stop for two hours and come together under one topic. It’s not a competitive thing, they all just appreciate each other’s art forms. And I think as it relates to our creative community, that’s what has made Portland so successful. Speaking of the Portland community, how often does Instrument build relationships with local businesses as opposed to national and global brands?

Honestly, I would say it’s a fifty-fifty split. We have our dream list, we have the brands we want to work with and we have brands whom we have worked and partnered with. At the end of the day, though, we don’t want to be a national agency. We want to be in Portland and we want to be working with local artists and brands. For my job purposes, we want to be a thought leader in the design community here in Portland, educating and helping people where we’ll all involved in the creative process together.

As a Portland resident, are there any side projects you work on?

I was a gymnast my whole life and I cheered in college. I now coach competitive cheerleading and that takes up a lot of my time. I coach three days a week and I travel on the weekends. I’ll leave work right at 5 p.m. so I can get out to Clackamas by 6 p.m, coach from 6-9 p.m, and then it’s back to Portland and back to work. I coach at an independent, competitive gym where we have kids divided by skill level. In the past, I’ve coached the oldest, more elite kids. But, this past year, I switched to coaching the little kids. I want to lay the (gymnastic) foundation for them moving forward.

What draws you to being a coach?

It ties back to the creative community. There are a set of rules for each skill level for what you can and can’t do. As a team, our ultimate goal is to nudge up against those rules. It’s a grey area requiring creative solutions. We’ll see a team do something and we’ll ask ourselves how we can do it differently. We’re not reinventing the wheel, but instead we want to do something that no one’s ever seen before. This coming Monday, Nov. 11, at 9am registration will begin for our next CreativeMornings/Portland talk with Matt Wagner. Matt is an art director and the owner and curator of Hellion Gallery. After earning a BA in Fine Arts from Indiana University, Matt moved to Portland, Oregon in 1996 and began curating art shows for local galleries. In 2010 Matt opened his own Hellion Gallery with the simple goal of seeking out and sharing great art from around the world.The talk will be be hosted on Nov. 15 from 8:30 - 10:30am at Ziba.

For November 2013, Creative Morning’s global theme is “Bravery”. The theme was chosen by our organizer Blake Howard and the Atlanta team and animated beautifully by fabulous Stewart Scott-Curran who created our monthly illustration.Our CreativeMornings/Portland speaker is Matt Wagner: http://creativemornings.com/talks/matt-wagner Here at CreativeMornings/Portland, the people who attend our talks are just as interesting as the people who grace the stage. Since the CreativeMornings website now highlights all the wonderful folks that make up the global community, we figured we’d do our part to celebrate Portland. We’re turning a lens on the people here with a monthly interview series highlighting someone from our audience!

To participate, just attend one of our talks and tweet anything of interest, whether it be a favorite quote or an attention-grabbing slide. Remember to use the hashtag, #cmpdx! Afterwards, we’ll comb through the online conversation, and a panel of highly biased judges will pick a top tweet and schedule a phototshoot and an interview. We’re excited to keep the creative energy flowing between each month’s talk by shining the spotlight on our community. 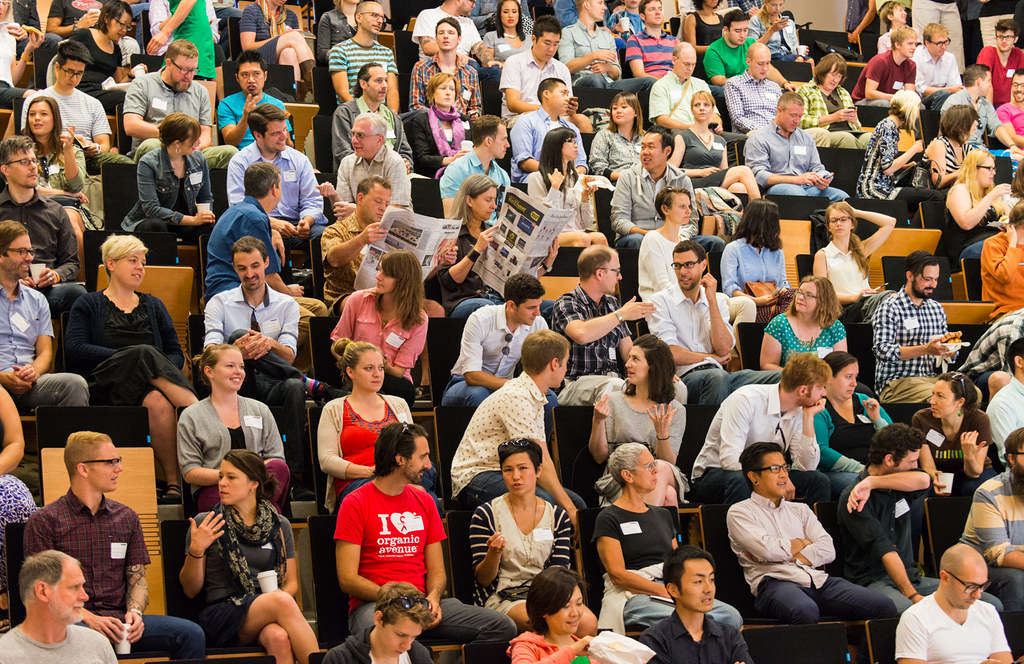 Here at CreativeMornings/Portland, the people who attend our talks are just as interesting as the people who grace the stage. Since the CreativeMornings website now highlights all the wonderful folks that make up the global community, we figured we'd do our part to celebrate Portland. We're turning a lens on the people here with a monthly interview series highlighting someone from our audience!

To participate, just attend one of our talks and tweet anything of interest, whether it be a favorite quote or an attention-grabbing slide. Remember to use the hashtag, #cmpdx! Afterwards, we’ll comb through the online conversation, and a panel of highly biased judges will pick a top tweet and schedule a phototshoot and an interview. We’re excited to keep the creative energy flowing between each month’s talk by shining the spotlight on our community. "If we set up an environment that we’re open to listening to anything that might come up and we’re willing to listen, then the end product of our collaboration is just so much greater." Welcome to the CreativeMornings/Portland city page! Check back here for upcoming events, new videos, and photos.