See for yourself
All Talks Individuals Chapters
blog
Blog la 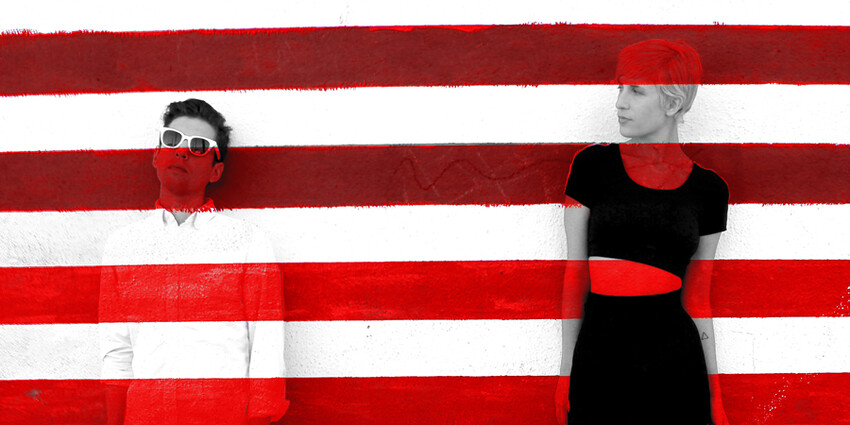 YΔCHT is a band “if it is known at all,” describes Claire Evans in their CreativeMornings talk. Claire speaks alongside Jona Bechtolt who founded the endeavor in 2002. The duo hail from Portland, Oregon and are now performing and making music, as well as objects, events, texts, video, products, websites, and other miscellaneous things in Los Angeles, California.

But YΔCHT is more than just a band. “We see being a band as an opportunity to create a lot of meaningful on and offscreen experiences for a lot of different people and in lot of different mediums,” Claire tells the audience. More than being just a band, Claire and Jona look at YΔCHT as a belief system and speak about those beliefs at our Los Angeles event. We’ve outlined a few of their beliefs from their talk below: The power of design. The power of logos, particularly for bands, as they are the most front-facing emblem or signifier. Music is emotional, and for a band, a logo is more than just shorthand. “The bands you support and wear say something about you, something about your tribe, and it allows you to find other people that can identify with the same ideas,” says Claire. Once an idea is put out into the world, it doesn’t belong to you any more. YΔCHT had been using the ‘Δ’ as an ‘A’ since their early days, and watched it make the journey as a design meme to the apex of corporate culture—gracing the cover of KΔty Perry’s most recent album, Prism. And then as a t-shirt with appropriated lyrics from one of their songs started popping up at Macy’s. Creative forms of protest. ‘Party at the NSA’ was a song released by YΔCHT in reaction to the discovery of surveillance of private citizens by the government. An issue of huge importance to YΔCHT, all proceeds from the single go to fund the Electronic Frontier Foundation, a donation-supported nonprofit that fights back against the government to protect our digital rights.

The song and motive developed into a micro-site as part of the campaign. In addition to this, YΔCHT produced t-shirts and will be performing at Stop Watching Us. Technology is a tool for connection. “Even though we often use it to isolate ourselves.”

Anything can be figured out. When Steve Jobs revealed the MacBook Air for the first time by pulling it from a manilla envelope, Jona and Claire knew they had to create a manilla-esque laptop case and set about making one as quickly as possible. If you can’t find an existing PDF or wesite that has the answer, you can find out by trial and error or brute force. Take on projects that are well beyond your skill set. “Because we know that those projects are the ones that are going to teach us the most,” says Claire. Like their collaboration with Chili Beans to manufacture and sell sunglasses. Work is play and play is work. “Every scary thing that you do is just a warm up for the next scarier thing.” And if everything we just listed above doesn’t sound scary enough, YΔCHT is also producing a short series with AmazonStudios. A music video made for YACHT’s song “Second Summer” in collaboration with Fox’s ADHD animation studio.