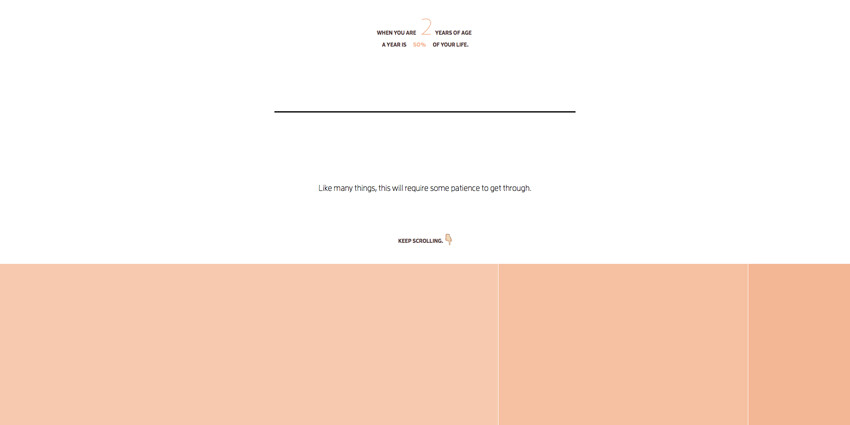 We hear it all the time: time flies! Time is an invisible force that we very often, sometimes desperately, want to control — slow down, re-route, capture in something tangible — but why is it that we feel that time flies? And why are we always surprised? What if we could what see time looked like? Maximilian Kiener, an Austrian designer, set out to visualize time to make sense of how we feel it. His site, Why Time Flies, invites visitors to visualize how our perceptions of time are directly proportionate to our age. Stunning and interactive, as you scroll down the site, you see the passage of time. We had the opportunity to speak with Max about the behind-the-scenes of this project (he went through 80 iterations in four months before he launched), how it’s been received worldwide, and why building something about time was so important to him.

What was the inspiration behind this project? Was there a specific moment you can recall that triggered it?
“Time flies” seems to be one of those phrases that only adults will say. It had baffled me for the longest time, until I first felt the same way — around the age of 27. I realized that it was a matter of proportion, the notion that you can only measure once you have something to compare it to. Being from a small village, I used to think that 30 miles are far, until I once took a 350 mile road trip and after that most other distances seemed small.

How would you describe the relationship between time, memory and human connection?
I think that the more memories you accumulate the more you can slow down time. But there is something bittersweet about time passing, getting older and your youth slipping away; there is no stopping it. Maurice Sendak talked more beautifully about this than I ever could in one of his last interviews (that Christoph Niemann illustrated).

But I like that time doesn’t discriminate. Time is one of the rare democratic luxuries.

This project allows us to understand time with the absence of a common spoken language. How has it been received worldwide?
Something that has really touched me is how people from other countries took it (some with permission) and translated it. There are now working versions in Hebrew, Arabic, and Russian. Recently, my family took in a Syrian refugee (who doesn’t speak English) and the translated Arabic version really helped us connect. We can’t help but be mesmerized by Why Time Flies every ‘time’ we scroll through it. Take a scroll yourself!

Max is an Austrian-born designer, currently consulting for BMW in Munich. He loves the versatility of digital media and how quick and cheap it is to prototype and iterate ideas in that medium. Learn more on his website.

That is really useful, thank you Katie