See for yourself
All Talks Individuals Chapters
blog
Blog PGH 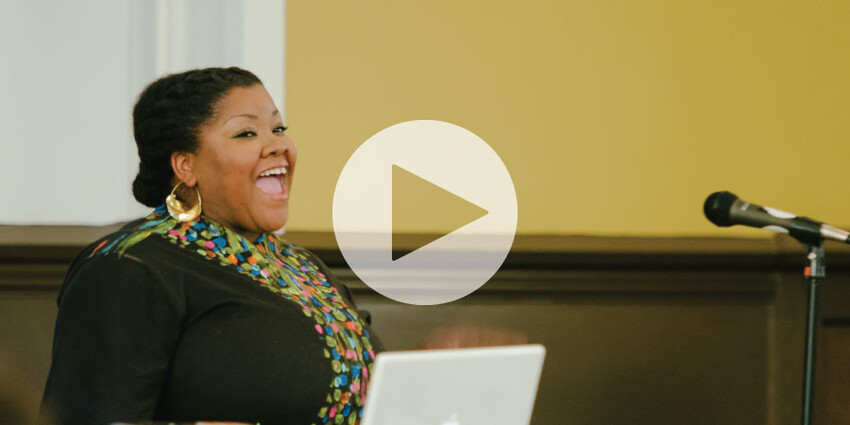 Kindred to a work of art, love is not a luxury, but rather a necessity. Vanessa German’s November 2013 talk at the 12th gathering of the Pittsburgh chapter of CreativeMornings was powered by the storied sensation and survival force of love. The CreativeMornings global theme, at the time, was Bravery. German boldly shared her commitment to the truly brave and artistic action of love through both her art and community-based initiatives.

For a feeling that can be dismissed as mysterious and charged with ambiguity, German fiercely faces love. She embraces it. She delivers love in her spoken-word performances and mixed-media work. Her love especially comes to its full expression when mentoring children in her neighborhood of Homewood in Pittsburgh, Pennsylvania. She formed an art-therapy collective, which began in her front yard, where children create, as she put it, “new places” by drawing, painting, and collaborating. This rose to a cherished activity that visibly brought together students, of all ages, from parts of the neighborhood. Acting neighborly is lovely.

German’s talk was a sermon, oozing with poetry. Her energetic presence was matched by a voice that bristles with compassion. She communed with Martin Luther King, Jr., who stressed that love is the foundation of civilization. I was, in turn, inspired to channel another master of prose, who also possessed and expressed a vigorous perspective on love—Maya Angelou, who recently passed away on May 28, 2014. At the 50th anniversary of the United Nations in 1995, Angelou spoke her poem “A Brave and Startling Truth”:

We, unaccustomed to courage
exiles from delight
live coiled in shells of loneliness
until love leaves its high holy temple
and comes into our sight
to liberate us into life.

If we are bold, love strikes away the chains of fear
from our souls.

Love costs all we are and will ever be. Yet it is only love which sets us free. A Brave and Startling Truth.

It is possible and imperative that we discover A brave and startling truth. …

Indifference infects a lot of people on our “pale blue dot” (1). It can take hold like a deadly virus. In her local community, German established the “STOP SHOOTING, WE LOVE YOU” yard-signs campaign—grounded and grassroots, in every way. What began as a personal message was quickly adopted by the neighborhood as a communal stand. While it justifies the news headlines, it also redirects people’s attention to the destination of hope—that virtue was always on the map of possibility. According to Angelou, “Love is like a virus. It can happen to anybody at any time.” German is fighting the virus of indifference with a virus of love.

In the footsteps planted by champions of love throughout human history—such as Martin Luther King, Jr., and Maya Angelou—German trusts love. She urgently reminds us to keep giving it a chance, because it never loses its potential and reach—its exact nature—as a gift. A swift affirmation from German’s conclusion to her talk was a creative call-to-action: “us love”—reinforcing that attempts to love and be loved applies to each and everyone, of us.