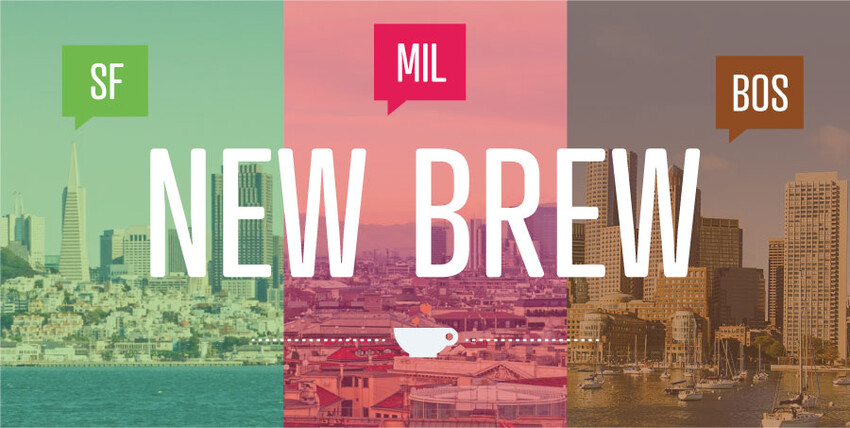 After our first ever search for new organizers, we’re thrilled to announce the winning hosts in San Francisco, Boston, and Milan thanks to help from our friend, Freddie at MailChimp. It was a difficult decision, but we met tons of impressive people along the way before choosing these three talented folks to carry the torch. Meet our new organizers! Which CM chapter would you like to visit and why? I’d love to visit Sao Paolo Creative Mornings. I spent a bit of time there a few years ago and I’d love to see how the creative community has evolved since then.

What excites you? What excites me is bringing people together, enabling connections and sparking projects and collaborations.

What have you failed at? I have failed at lots of things including playing the guitar and finding good Indian food in San Francisco although I’m sure it’s out there somewhere! Ultimately all failure is an opportunity for growth.

What’s your vision for CreativeMornings/SanFranisco? The vision for CreativeMornings/San Francisco would be to further energize and enrich the creative community in the city. Diversity is incredibly important to me and you can expect to see a vibrant and diverse range of speakers. I also want the San Francisco chapter to be a pivot point for people to meet each other, form relationships and to spark conversations and projects that go beyond the event itself. Which CM chapter would you like to visit and why? Oh well, just one? My dream is to have a trip around the world and visit them all! Well, if I have to choose just one, I’d love to visit the Mumbai chapter. I had the chance of meeting its host, Amishi, during the Milan Design Week in Milan and I’d really love to see a young chapter that is so far from Milan from a geographic point of view but animated with the same type of vision and enthusiasm.

What excites you? Traveling and meeting new people, starting a new challenging design project, buying a new book by Douglas Coupland, having all night long discussions with friends about utopian visions of the future.

What have you failed at? It’s very hard to focus on a major failure: I’ve learn to build stronger foundations on the ruins of my failed projects and attempts. There were several, but probably not yet big enough to have an outstanding one. This means I have still the opportunity for a couple of big failures in my near future.

What do you consider your greatest achievement? Getting on a stage when I was ten with a violin, pink pleated skirt, ponytail outfit. After that, everything else was way easier.

What’s your vision for CreativeMornings/Milan? I’d love to give the opportunity to stunning creative people in Milan to share their vision no matter what their job title is. The biggest achievement for our chapter will be to contribute growing a broader sharing culture in Milan. Our city needs to have young and inspiring creatives that feel free to take the stage and add their voices to the cultural discussion. Which CM chapter would you like to visit and why? Definitely Sydney. Despite having a mortal fear of spiders, I almost accepted a job to move to Sydney about six months ago. I’d like to visit, catch a glimpse of these mythically-large eight-legged beasts, and finally get over this fear of missing out I’ve been experiencing ever since…. Ya know what? On second thought, Oslo.

What excites you? Well I declare…

What have you failed at? I’ve failed miserably at being okay to fail miserably (#meta). But seriously, if it weren’t for having to actually go outside in order to pay rent, there is a high likelihood that I would just sit on my couch watching reruns of the Sopranos for fear of being just terrible at something. Also, paying said rent.

Who would be the ultimate CreativeMornings speaker? Edward Norton as Tyler Durden. If that’s not possible, then Edward Norton as himself is more than acceptable. I bumped into him one time as he was leaving the MTV building in Times Square, strewing his papers all over the place. I was in such dude-love-shock that I didn’t reach down to help him collect his things. I regret this to this day.

What do you consider your greatest achievement? Despite my borderline translucent skin, I was actually a professional stepper (a la Stomp the Yard) for about four years. At the very least, I think that constitutes a most interesting achievement.

What’s your vision for CreativeMornings Boston? As amazing a city as it is, Boston can often feel too rigidly divided by neighborhood. I would really like to create an environment that transcends these barriers, and by doing so, fosters a collaborative and shared community that connects people who might not otherwise have had the opportunity (or interest) to come together.