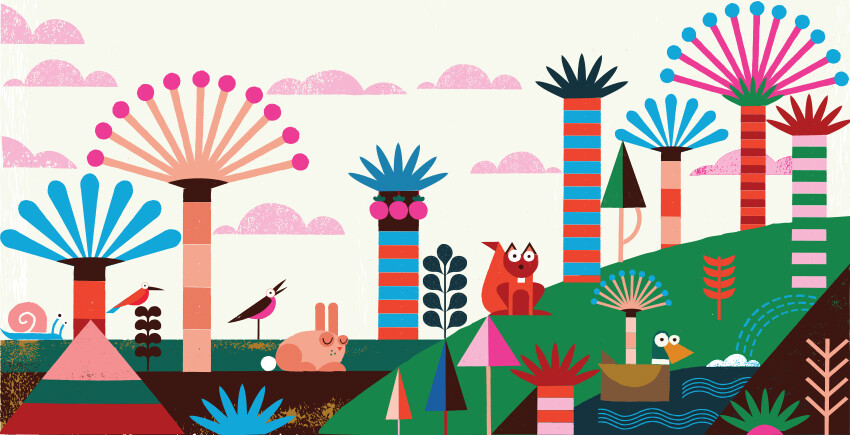 It has been a tradition at CreativeMornings to work with an artist in our community to create an illustration for the monthly theme. December is all about Sound.

The illustration is everywhere — in 150+ chapters’ social media channels and at the events. Based in Carlow, Ireland, Derry Dillon is a freelance illustrator with over 15 years experience in children’s book illustration, educational publishing, lecturing (NCAD). He regularly exhibits and along with digital artwork he also enjoys exploring traditional materials, working in 3D and experimenting with various types of printing. As a youngster, I entertained myself by making weird little books (mainly inspired by much-loved old copies of Asterix and Tintin) and as I got older I found myself drawing and painting daily. I don’t recall making a conscious decision to be an illustrator, but I knew I’d definitely pursue a career involving art in some way. Illustration just seemed to be the right fit.

After art college, I developed a practice between illustration and lecturing in graphic design, but for the past few years I’ve decided to freelance full-tim; now can’t imagine doing anything else. At first, my drawings were quite detailed and representational but the work slowly developed to become less fussy and more geometric – now a triangle becomes a nose, a simple circle makes an eye, and limbs are basic bendy lines. I find the simpler the shapes, the more impact the image has and using limited forms gives me a feeling that the image is being constructed rather than loosely developed. I think this ‘construction’ approach stems from my love of typography where symmetry and weight of line can be subtle but effective. I’m a big admirer of the multi-craftsman Eric Gill, not only for his art and lettering, but also for his design theory.

These days, illustrators such as Henning Wagenbreth, Ben Newman, Adrian Johnson and Peter Brown (to name a few) are creating very beautiful artwork. If I’m not illustrating, I’m usually in a bookshop drooling over work such as theirs. Tell me about the happiness moment in your career. Describe the feeling, the moment—bring us there.

I exhibit my personal work as much as I can and have had a few solo shows and sometimes, on rare occasions, I’m satisfied with the work I present. But the happiness moment is definitely when the work goes into the space and at last I can see the artwork as a collection coming together. It’s an exhilarating process and very fulfilling; if the public feedback is positive, that’s a bonus. From experience I must say: good clients equals good artwork.

I don’t always practice what I preach, but while tutoring I’d regularly tell students to keep their ideas simple, try not to procrastinate, and just make something. The process is where the creativity occurs so at the early stages don’t get too hung-up on how you think the finished artwork should appear — let it develop instinctively. If you could open a door to anywhere, where would you go? Why?

I’d love to see the Gutenberg Bible come off the press or, maybe because I’m Irish, witnessing the creation of the Book of Kells. Of course spending a few days in Hergé’s studio would be amazing. I grew up on a farm and love being around animals. My wife says if I didn’t become an illustrator I’d probably have been a vet. I have a dog and he’s my little companion in my studio and a few neighboring cats are always about.