See for yourself
All Talks Individuals Chapters
blog
Blog sto 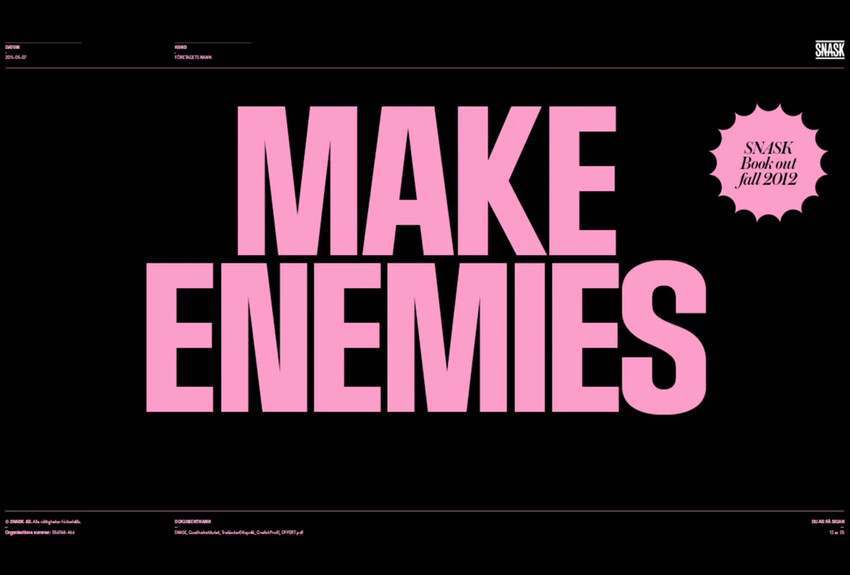 How to be a creative entrepreneur

Early in 2012, CreativeMornings/Stockholm was graced by the eccentric duo Fredrik Öst & Magnus Berg who make up the design, brand, and film agency Snask. Between bunny suits and drumrolls, they spoke on how to be a creative entrepreneur. Here are a few tips from their talk.

Make enemies.
It’s important to make enemies. Not so much going out to actively make enemies, but more so to not be afraid of doing so. If you have fans, you inevitably will have enemies. Follow your beliefs, stick to your guns, and defend them. Niche yourself.
If you you’re a full-service agency, you’re probably sh*t at most of what you do. If you’re good at everything, you’re not groundbreaking at anything. Say yes.
Say yes more than you say no. “All of my life, I had more fun saying yes than saying no.” Pee on yourself.
Stay down to earth. Don’t take yourself too seriously. You have to maintain a critical distance from yourself to avoid becoming a precocious douchebag. Be nice to people. Smile. Show them balls.
Be bold. Have courage. Life is about ambition. Go for it. Take risks.

Tell pink lies.
Pink lies are the fake-it-til-you-make-it lies that boost yourself and make yourself sound awesome. Spice things up with pink lies occasionally. White lies are boring.

There is no such thing as luck.
We live by the rule that luck is ambition. You must have ambition.