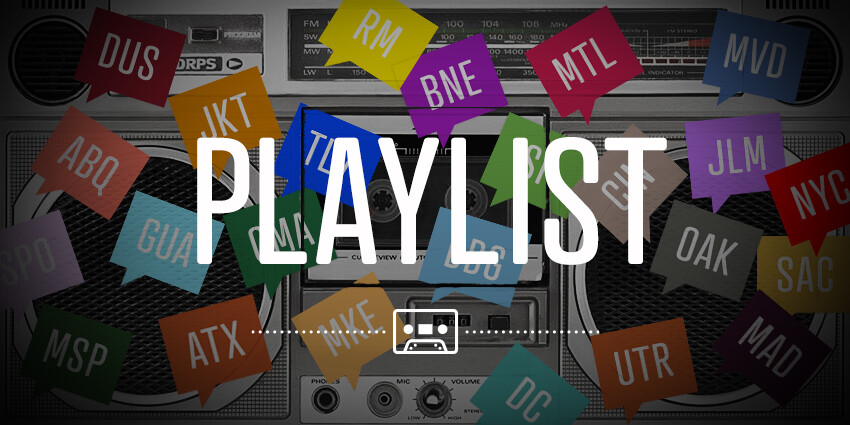 The 2016 CreativeMornings Summit was in Austin last month, and in the spirit of collaboration that pervaded, we thought we would try something different this time and crowd source the playlist to the CreativeMornings’ chapters. Shout out to Sarah Meublat of the Montréal chapter for the fantastic idea. So in keeping with this month’s theme, CreativeMornings chapter organizers were asked to recommend a song (or a few) that represents the “sound” of their city, along with a little context so we understand why.

We received some great selection from around the global community, from Milwaukee to Jakarta we are going to take you around the world, sonic speaking. Bon voyage.

Song: New Slang by The Shins
Comment: The Shins are origninally from ABQ, though they try to avoid the connection. This song is the middle finger to ABQ.

Song: Pride and Joy by Stevie Ray Vaughn & Double Trouble
Comment: Stevie Ray is one of two musical patron saints of Austin. Pride and Joy is quite possibly one of his most iconic tracks, and represents how many in town feel about our beloved city.

Song: Shotgun Willie by Willie Nelson
Comment: Stevie Ray is one of two musical patron saints of Austin. Pride and Joy is quite possibly one of his most iconic tracks, and represents how many in town feel about our beloved city.

Song: Kataji by Yura Yunita
Comment: Sung in our local Sundanese dialect, and is modernised with original jazz score, singer Yura Yunita may be young and new in the Indonesian music industry from 2014, but her powerful voice and eclecticsm wins the heart of all generations with this song.

Song: Das Modell by Kraftwerk
Comment: Kraftwerk was a electronic music band from Düsseldorf in the 1970ies. “Das Modell” is their most famous song (an english version “the model” is existing). CM DUS had an event in their former studio “Klingklang”.

Song: Lo que Nadie Ve by Hey Chica!
Comment: Hey Chica! is one of the indie rock bands characteristic from GDL, and Itzell, the vocalist is part of the staff members of CMGDL. The songs talks about what CreativeMornings is about, the translation would be “You who do magic all day, share, what no one else can see.”

Song: Senja di Jakarta by Banda Neira
Comment: Translated “Sunset in Jakarta” this indie band telling the story of living in Jakarta, with shitty traffic and dusty road, in an optimistic perspective of a working-class person riding bike home on the afternoon.

Song: Kompor Meleduk by Benyamin Sueb
Comment: An oldie goldie rock & blues song from a Batavia-born Indonesian legendary comedian, actor, and singer. It’s an iconic song about the city from the 70s, even until now. Kompor Meleduk means “blow-up stove”, and the song tells about Jakarta’s iconic disaster of flash-flood, house fire, and condition of Jakarta’s native community of Batavian people who live in a poor condition but always full of hope.

Song: Jerusalem by Alpha Blondy
Comment: We loved that this is a Raggae song in 4 languages. It’s a love song, a love for Jerusalem and its diversity.

Song: Feel by Kiings ft. Rae Cassidy
Comment: Frequent collaborators, electronic duo Kiings refer to themselves as ‘humble musical chemists’ and call their sound ‘Future Soul.’ Together with native Rae Cassidy, they co-wrote a breezy, soulful number, with a sound as deceptively large as our city itself.

Song: Running With The Wolves by Cloud Cult
Comment:This song celebrates freedom. I love the line “We were running for a reason, left our cubicles in little flaming piles.” Feel that that’s a good anthem for creatives.

Song: Anthem by Leonard Cohen
Comment: A few weeks ago, Montreal lost one of its most beloved artists and poets: Leonard Cohen. “Anthem” is one of his masterpieces. A song which resonates deeply with CreativeMornings’ philosophy. A song about hope. “Forget your perfect offering/There is a crack in everything/That’s how the light gets in.”

Song: New York, I Love You But You’re Bringing Me Down by LCD Soundsystem

Song: Tell Me When To Go by E-40
Comment: Dat hyphy music, born in Oakland.

Song: What is Hip? by Tower of Power
Comment: Tower of Power started in Oakland in 1968 and his been going strong ever since. Who can argue with 48 years of soulful jazzy greatness?

Song: Heart of Hearts by !!! (Chk Chk Chk)
Comment: Band founded in Sacramento, their shows are fully of happy energy.

Song: Ride or die by Rituals of Mine

Song: California Soul by Marlena Shaw
Comment: On any given Tuesday you can hear this song playing in a coffee shop or restaurant in the city. The song embodies what it feels like to live in this foggy, sunshiney wonderland.

Song: (Sittin’ On) The Dock Of The Bay by Otis Redding
Comment: Written during a visit to San Francisco in 1967, Otis concepted the lyrics “I watch the ships come in and I watch them roll away again” while sitting on a rented houseboat in the San Francisco Bay.

Song: Santa Sampa by Vespas Mandarinas
Comment: This a new rock band that s trending in Brazil, and they are passionate about São Paulo, writing lots of songs with references about the city, and this one specifically is a great description of the good and bad of the city. Awesome!

Song: Hello Frustration by The Wimps
Comment: A punk rock trio from Seattle known for their fun music videos and self made art.

Song: Redhouse by Jimi Hendrix
Comment: Jimi Hendrix the guitar powerhouse started at 15 years old in Seattle with a $5 guitar his father bought him. He called his music “electric church” because he believed music was his religion.

Song: Lithium by Nirvana
Comment: One of Seattle’s hallmark moments in music history can with Nirvana’s release of “Nevermind.” Unlike the albums most popular title, “Smells Like Teen Spirit”, “Lithium” seems to capture the discontent (both then and now) with status quo and, at the same time, a struggle to find the where-with-all to do anything about it.

Song: One day / Reckoning Song (Wankelmut Remix) by Asaf Avidan
Comment: The combination of folk and techno remix…the lyrics…and also just the vibe the song gives off all say “tel aviv” a young old city full of contradictions intersections and stories. Also asaf has a super unique voice (as does tlv ;)

Song: Deeper Shade of Soul by Urban Dance Squad
Comment: Urban Dance Squad were one the Netherlands first hip hop squads. They stood out because they combined rap with other music styles and were very influential to the entire Dutch hip hop scene, which today is very diverse and well established.

Song: Banned in D.C. by Bad Brains
Comment: You can’t talk about Washington DC musical contributions without talking about the Bad Brains. They have had an out-sized influence over modern music, with almost every second-wave punk band and alternative musician citing them as a key influence. Bad Brains are true originals, an all African American hardcore band infusing elements of reggae and jazz into their furious two minute sonic explosions. This eclectic mix of contradiction, modernity, sound and culture is reflective of Washington DC personality, diverse with world culture but always local and unique. This year the Bad Brains were nominated to the Rock-and Roll Hall Fame a move which surprised many who see the hall of fame as a bit out-of-touch. Ian MacKaye of Fugazi and Minor Threat fame, sums it up well, “The person who put Bad Brains name in the hat is either visionary, or they’re savvy and trying to bring some legitimacy to their brand”.

Well I hope you enjoyed that little tour, I be back next month with another playlist for another theme. In the meantime, if you dig these playlists, I would appreciate it if you shared them and gave me a holler on Twitter @jiquin.