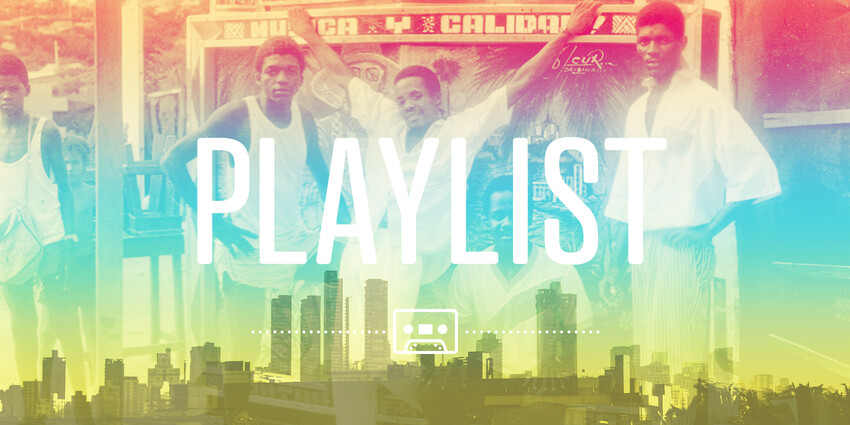 This months theme, Tradition, was selected by our fine friends of the Barranquilla chapter. And as is the tradition with these playlists, I collected a few tracks from the city that nominated the theme.

In my research to find local bands, I discovered something else that really caught my attention. It turns out Barranquilla has a deep tradition of Afro-Carribean music with an intense and competitive DJ culture. The local DJ’s build elaborate monuments to music called Picòs or Turbos. These custom-designed sound machines are more than the typical DJ booth, they are towering constructions built with multiple speakers, sound processing equipment, amplifiers, and turntables. The Picos even have their own identities and personalities, with names like “El Mayor Turbo Digital” and “El Lobo”. Vivid techno-colored collages depicting powerful beasts, action heroes, cultural icons or ancient warriors wrap around these elaborate alters like neon hieroglyphics. Half pinball machine, half boombox, all style. As far as I know, nothing like this exists in the USA, or at least I’ve never seen one. We really need to step it up. The Picò tradition is rich, with its roots are in the Afro-Colombian neighborhoods of Barranquilla and Cartagena, primarily. Where once they were frowned upon by authorities, these mobile sound-systems and the related culture are beginning to get international attention via a number of publications with articles in Vice, The Guardian, City Lab and elsewhere. I have barely scratched the surface of the dynamic Picò tradition.

Below is a mini-doc exploring the art of Pico. It’s well worth your time. Or even better, do what I’m hoping to do, plan a trip to visit Barranquilla and see them for yourself.

Barranquilla - The Art of Picò from The Society Fish on Vimeo.

From the Long Beach lyricist Vince Staples to the moody melodies of Depeche Mode to soul slinger number one, Wilson Pickett, this months playlist is filled with song related to tradition. These songs of heritage, ritual and habit might make you nostalgic for yesteryear or might just get you dancing. Either way, I suggest making CreativeMornings Playlists a new tradition.

Thanks for listening, and if you’re so inclined, follow me on Spotify and give me a shout on Twitter. I would love to hear from you.