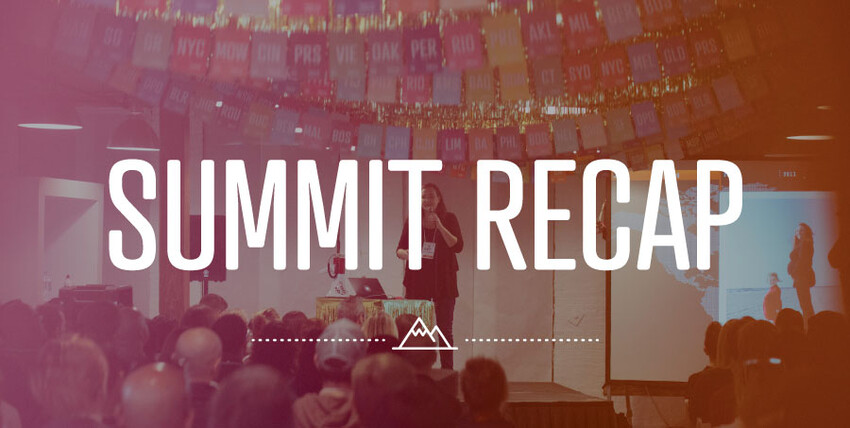 For those of you following along online, you may have noticed that October has been a very special month for us. Aside from marking our sixth birthday, October brought the first ever CreativeMornings Summit, where we welcomed over 175 organizers and their teams from 65 cities around the world to Brooklyn.

Hand-lettered nametags thanks to help from MailChimp, printed on Moo Luxe postcards. Photo by Bekka Palmer.

With attendees representing almost 30 countries, the inaugural CreativeMornings Summit was a two and a half day event that featured talks from seasoned organizers, chapter storytelling, food, workshops, a trip to the MoMA and more. We hosted the event at the Invisible Dog Art Center, kicking things off with some pre-summit brews provided by Sixpoint and some live screenprinting from Orlando-based RealThread. RealThread also knocked it out of the park by providing all the t-shirts and screenprinting for the Summit.

The first official day of the Summit began with a video from talented CreativeMornings/Chicago videographer Ben Derico and a talk from CreativeMornings founder Tina Roth Eisenberg.

One by one, hosts from around the world took the stage to tell stories, take #selfwes and share experiences. From best practices to horror stories, chapters divulged on what it was like organizing events for their creative communities. For those teams and chapters who couldn’t make it, many sent in hellos from afar (like this one from CreativeMornings/Bangalore). After our first full day, we headed over to the Empire State Building for a reception hosted by Shutterstock. If you’ve ever wondered what happens when over 100 creative people tag a New York City subway car, wonder no more. Shutterstock printed out a 30ft-long subway car poster for the event, encouraging CreativeMornings teams to tag it with their respective cities. You can see a timelapse of the action here.

Day two began in the most meta way imaginable—with a CreativeMornings/New York event of our own. Hosted at the MoMA, we invited sign painter and street artist Steve Powers to speak on the month’s theme of Crossover. Of course, this called for an epic photo opportunity, as we invited all the organizers and their teams to take the stage and represent their respective chapters. After CreativeMornings, we made our way back to the Invisible Dog for a Q&A with headquarters before launching into a brainstorm session on the future of CreativeMornings. Working with Fred Dust and some of the amazing team at IDEO, attendees broke into teams to ideate solutions around everything from connecting local communities better to sustaining the global CreativeMornings audience. All brainstorm sessions need a sugar-fueled break, so we paused only to gourge ourselves on delicious Baked by Melissa cupackes, Fatty Sunday chocolate-dipped pretzels and some caffeine from Blue Bottle Coffee.

After two days of workshops and talks, it was time to unwind and celebrate. We hosted an epic after party at the beautiful Pioneer Works Center for Art + Innovation (where CreativeMornings/NYC held their March event with Dustin Yellin) located in Red Hook, Brooklyn.

We were thrilled to have a Smilebooth at the Summit After Party, courtesy of our friends at Squarespace. See more GIFs and increasing inebriation (hat tip to Sixpoint!) from the event here.

We tied up the evening with a Talent Show sponsored by Squarespace—highlighting poets, singers and dancers setting the tone for some fancy-footwork late into the night. To check out even more photos and magic-making from the first CreativeMornings Summit, dive into our Flickr stream here or check out the tag #CMSummit14 on Twitter and Instagram. We’ll be following up with more takeaways from the event in the coming weeks, hopefully paving the future for CreativeMornings. Stay tuned!

We couldn’t have made this happen without the help of people and partners who donated time, money and resources to make the CreativeMornings Summit possible. A huge thank you goes out to the folks below (and many more). Thanks for that little recap