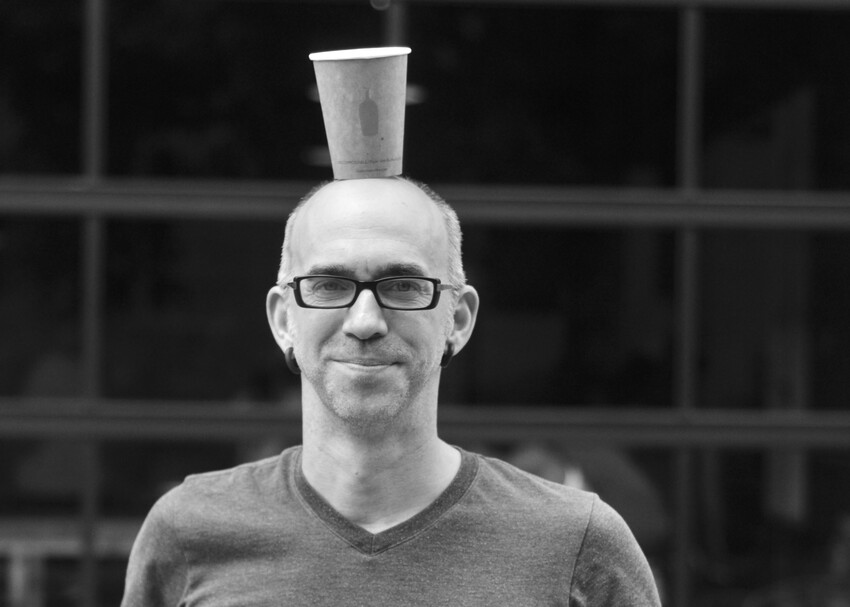 Sure, after working a few years in the bar business, one might think applying to be a porter for at Blue Bottle Coffee—washing ceramic cups and saucers—was surely a demotion. But, for Michael Bewley, a quirky man who was looking to love coming to work again, found an environment where the people were happy doing what they love and in so doing, gave himself an emotional promotion.

Michael, who says he’s “more a coffee mule than a barista” will service 300 attendees with 15 gallons of coffee in about 30 minutes with dozens of FETCO brewers at this month’s Creative Mornings as guests Street Etiquette speak on the theme Heritage.

I meet him in the afternoon, at Blue Bottle Coffee’s Roasting location in Williamsburg to talk about the coffee that will make the ‘Morning’ cameo—its heritage and his.

How soon upon awaking in the morning does coffee enter into your life?

Most days, within the first hour. I can certainly start a day without it but my smile is not as big.

Do you have a coffee heritage? What is it?

Short answer ‘Yes’. Mid length answer is, I started my life in coffee at 23 when I opened a coffee house in the town I went to college in. The road from there has been winding and adventure filled, often taking me away from coffee yet always leading me back here.

Such is almost always the truth I find with coffee. Do you prefer your coffee black or with milk. And, do you have a preferred brewing method?

My coffee is almost always black. That’s not a stance on the ‘purity of the bean’ or anything, it’s just how I started drinking it. There are times I will listen to a barista when they say to try a certain coffee with a splash of milk.

Like a parent with their children, I love all brewing methods equally; there are just certain times I love some a little more than others.

I agree. Its about what I’m feeling most of the those times, that will dictate how I want my coffee brewed. Can you share your role at Blue Bottle Coffee? And, how did the partnership with CreativeMornings come about?

I am the Lead Tech for the East Coast here at Blue Bottle. Which means if it’s broke I do my damnedest to fix it. From the espresso machines to the roaster to the hinges on the bathroom door.

The partnership with CreativeMornings came during the first talk I attended. I was sitting there bright and early on a Friday morning drinking the coffee provided. It was when those first drips of caffeine started hitting my ‘anything is possible’ neurons that I had the thought, “These people are awesome! What they are doing here is awesome! Blue Bottle is awesome! There’s something that needs to be happening between us all!”

I wrote to them the next week and asked if they would be interested in serving Blue Bottle at their next talk.

Michaels’ eyes light up as he tells this story against the brick wall across from the Blue Bottle storefront. For me, his facial muscles mimic an action of awakening: dilating eyes, color flushing into the cheeks and a smile, one of, “Aha, I’ve discovered something.” Without him knowing it, he’s shown me the physical style of what happens when creatives meet the ‘Morning.’

This Friday you’re going to be the barista for CreativeMornings/NewYork. Can you tell me how you define being a barista?

To clarify, on Friday I am more a coffee mule then barista. My main job will be transporting and lifting 15 gallons of coffee and making sure no one’s cup is empty. I leave the real barista-ing to the trained professionals. It’s been a while since I have been on bar.

Can you tell me about the heritage of the coffee you’ll be serving on Friday? And, can you also speak a little about the importance of knowing the roots if a coffee for you as an individual and for consumers.

Oh, that’s a deep one. I’m just a grease monkey at heart and leave that kind of talk for the professionals. There are so many people in this company, and this industry at large that spend insane amounts of time, energy and travel dedicated to the importance of knowing the roots of the coffees we roast and serve. But on the short, I will be serving up our Three Africans Blend, which was roasted on July 20th so that it is just hitting its sweet spot on day five.

Note: A coffee’s sweet spot is often referred to when, upon the completion of roasting, coffee beans rest or degas and while CO2 is released, the flavor of the cherry bean enunciates.

This month’s New York speakers have made their lifestyle a style. Coffee itself is a lifestyle and quite stylish I might add especially as one begins to consider its origin countries and the kind of cherries and flavors different countries yield. How do you see style—your own or that of the coffee—play a role in it being made and it’s consumption?

Always remember coffee is a drug and like all drugs there is a drug culture and style that rises up. I don’t know what the coffee equivalent of Heroin Chic is but it probably involves a denim apron.

To me, coffee is so much about ritual and process. It is one of the reasons I am so drawn to the drink and the culture that surrounds it. I’m a process junkie. I think the industry draws in people that love process and experimentation.

I so agree. Both are the existence of the creative. Can you share the brewing method this coffee for those that might want to try it and will there be milk?

The coffee this Friday will be brewed on a FETCO CBS-2132 XTS brewer. I will be using parameters that our trainers have come up with based upon their tests for this blend. There will be milk both Whole and Skim.

I’m a big proponent of coffee as a culture. Do you see it as such? And, if so, what can you say about New York coffee culture to the greater landscape of the heritage of specialty coffee?

I would just embarrass myself if I tried to talk about the NYC coffee culture with a pro such as yourself. You are living in the midst of it; I just do my best to make sure the machines keep running.

While I don’t consider my self a pro, but ever a student, Michael does leave our interview with an inspiring thought, coffee is a living culture, just like style.

When I take Michael’s photo, he says I make him look like some sort of [coffee] superhero. This Friday, at 8:15 in the ‘Morning’ he will be. Drip with skim, please.