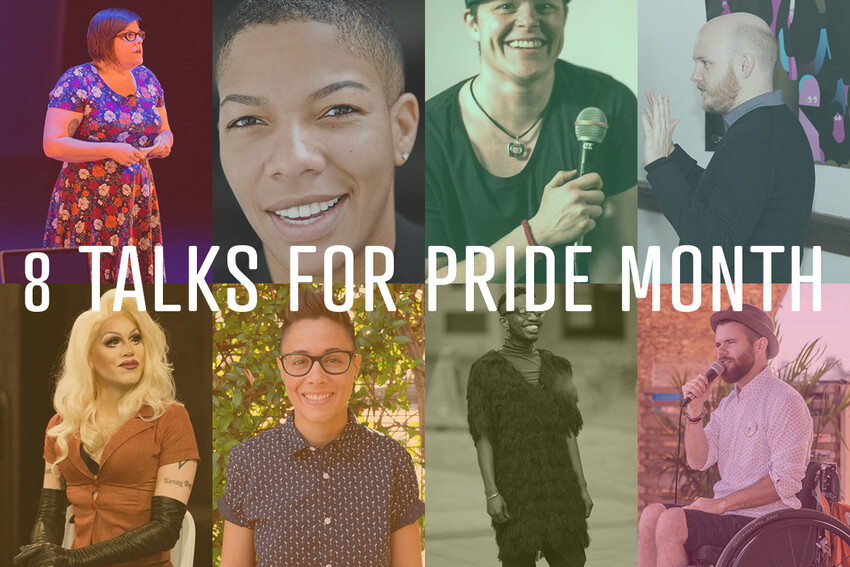 In the United States, the month of June celebrates LGBTQ Pride Month to honor the 1964 Stonewall riots that took place in Manhattan. It’s an important historical event that inspired the gay liberation movement and ushered modern rights for the LGBT community.

The celebration is two-fold: first, the understanding that the human condition is not a two-sided coin but rather a multi-faceted diamond; and two, the humbling influence of knowledge that cultivates an understanding, which leads to compassion, that improves how our society advances into the future.

Here are eight talks from LGBTQ speakers in our global community that share stories of one’s journey to self-love, acceptance, how it inspired their work and the communities they serve.

Sarah Vitorino, Ph.D. is a researcher and master coach who teaches positive well-being among LGBTQ+ youth and their communities. Her workshops deconstruct stereotypes, dismantle shame, and teach innovative self-love practices to reveal our inherent worthiness, beauty and light.

So now I can look at myself in the mirror, eye-to-eye contact, and I can say, “What about you is undeserving of love?” … nothing. Nothing.

2. The Advocate and The Entrepreneur, and the delicate balance of trying to be both by Mike Morrison, CreativeMornings/Calgary

Mike Morrison has made a career of sharing his opinion. Between his projects that include Mike’s Bloggity Blog, Calgary By Bike and SocialWest, he is constantly trying to find the right balance between writing what he believes, fighting for LGBTQ, and not alienating his potential readers and customers.

3. Lessons on Love & Self Discovery by Matie Fricker, CreativeMornings/Albuquerque

From trauma to self-discovery to successful business owner, Matie Fricker now lives her dream and found her calling. She started Self Serve, not because she thought owning a sex store would be fun, but because she was unhappy with her body and sexuality, and knew that others were struggling with these same issues. Now, she helps people who are nervous, scared, fearful and uncomfortable about sex and their bodies find balance and have a happier healthier sex life.

Intimacy is the sexiest thing in the world, but being intimate with yourself is where it starts.

If you really wanted to make an impactful change on South African society at large, we would have to start by influencing culture.

5. Don’t be afraid (to love yourself) by Scott Jones, CreativeMornings/Montreal

The love in work of activist is demanding love. So people have to love themselves and then demand others love them too.

Fear does not exist. It exists as a by product of success because you’re too afraid that you’re going to do too well.

This reviled sweetheart fled the cornfields of Iowa for the dark, exciting city of Pittsburgh, where she paraded on stage like a vampire in high fashion. People thought she was either stupid or possessed by a drag demon until Sharon won season four of “RuPaul’s Drag Race,” posed for PETA and the cover of Out magazine’s most influential people list, and was honored by the Pittsburgh City Council who declared June 12 “Sharon Needles Day” for her outstanding work as an advocate for LGBT youth.

If you ever really gonna risk anything on anything: Risk it on the ones you love.

Jamie knows about the finicky nature of reality. Constantly moving and ever-changing. In his Reality keynote he talked about gender roles, transitioning from female to male, and larping (live action role-playing). Jamie talks more about larping in the Q&A.