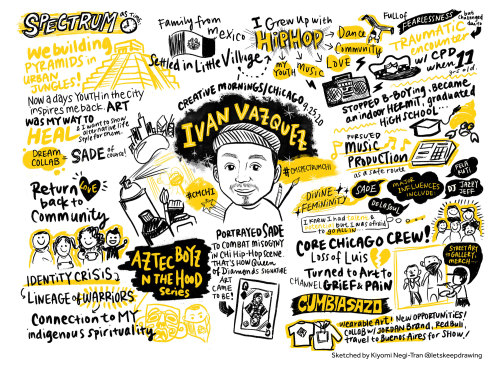 “During these tough times, they can’t cancel our creativity”

At the newly opened creative maker-space and social club Guild Row, Ivan Vazquez shared his experiences as a Mexican-American man growing up in Chicago’s Little Village and how loss, his best friend’s death at 17, and a traumatic experience with the police at age 11 ultimately lead Vazquez to step out of the grey and into the spectrum to be a renowned visual artist recognized locally and globally, creator, musician, and DJ with a lifetime love for Hip-Hop, Graffiti art, and Chicago’s breakdance/beat box scene.

Presenting his painting La Princesa Mononoke ( The protector of the urban jungle), Ivan talked about being full of fearlessness as a young boy in Chicago, spending time with his crew breakdancing, going to school, and spending time with his best friend, Luis. Breakdancing on the corner with friends, they were approached by a police officer. Exclaiming, “We are just dancing!” Vazquez recalled a swift punch to the stomach and on the ground in tears. “I had the fearlessness knocked out of me.. And I retreated to the grey area, the safe space in the spectrum…[in the end] I used art as a weapon to combat fearlessness.”

Coping with this trauma, Ivan stopped B-Boying and dancing and became an indoor hermit focusing on high school studies and video games. He discovered music production as a safe route stating, “I knew I had talent and potential, but I was afraid to go all in.” Citing major influences such as Sade, De La Soul, DJ Jazzy Jeff, and Frankie Knuckles as inspiration for his music, ultimately the music of Sade inspired Vazquez to later create his Queen of Diamonds street art graffiti series. This series would come to represent the teachers, activists, and people in the community that he considered heroes. Tied in with Hip-Hop, Sade became a symbol of femininity, compelling Vazquez to engage and contribute to the feminist movement to combat misogyny and gender inequality in today’s society.

Having lost friends to senseless gang violence, including his childhood best friend murdered at age 17, he stored this pain away for over 15 years. Discovering an old photo from junior high graduation, Ivan had an epiphany. “It was seeing Luis’s heavenly smile and feeling his hand on my shoulder that I had my revival…Art was my way to heal. I turned to art to channel grief and pain.” It became Ivan’s mission to empower and educate youth with positive, relatable, and alternative lifestyles away from violence and gang culture, citing his work with The Simple Good.

His work celebrates Chicago, a deep spiritual connection to his Mexican heritage and the indegenious Aztec culture, and a connection to the Earth. “Chicago is all about the unity.. the solidarity.. All that love I received as a kid.. I am so excited to give it back to the community.” In the last few minutes of his talk, he emphasized the need to come together and unify as a city and community, to help create a strong foundation and balance in a constantly changing world.